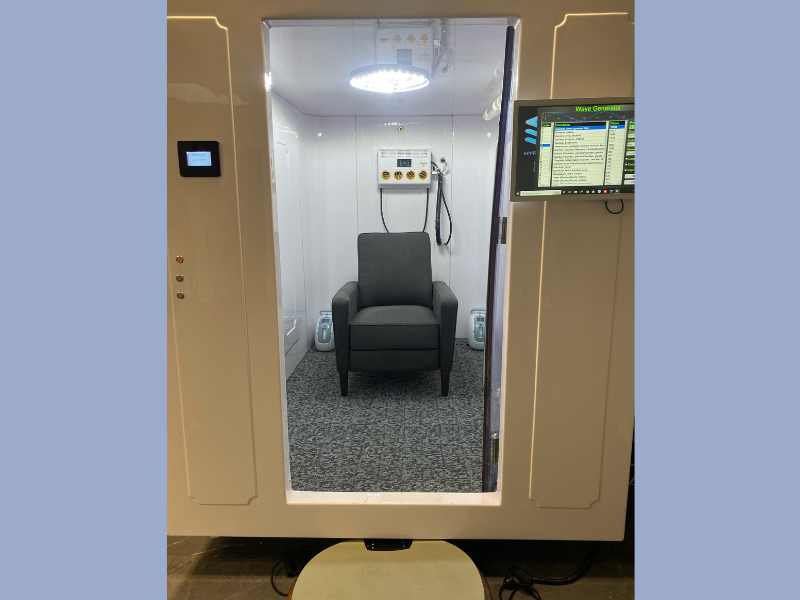 “I couldn’t walk from my car to the front door of the center without stopping multiple times to catch my breath. . .”

Sit back and relax in one of our recliners as you enjoy the latest in oxygen therapy. The Hyperbric Room is a low pressure, ambient air hyperbaric chamber. It is safer than other high pressure oxygen chambers due to its low pressurization system.

Your body’s tissues need an adequate supply of oxygen to function. When tissue is injured, it requires even more oxygen to heal. Hyperbaric oxygen therapy increases the amount of oxygen your blood can carry. An increase in blood oxygen restores normal levels of blood gases and tissue function to promote healing and fight infection.

Under normal circumstances, oxygen is transported throughout the body by red blood cells. With the Hyperbaric Room, oxygen dissolves into all the body’s fluids, the plasma, the central nervous system fluids, the lymphatic system and the skeletal system. During the dissolve, oxygen can be carried to areas of diminished or blocked circulation helping the body support its own healing process. This activity greatly enhances the ability of white blood cells to kill bacteria and reduce swelling, and it allows new blood vessels to grow more rapidly in affected areas.

The Hyperbaric Room is simple, effective, and painless. There are acoustic light waves inside the Hyperbaric Room which use a radio transmitter to excite plasma gas in a glass tube. The continuous frequencies emitted are similar to radio waves transmitted from a radio tower. When energy is emitted from the plasma tube antenna, it can be absorbed by an object with correlating resistance.

The resistance of the wave emitted from the plasma tube contrasts with microorganism frequencies (bacteria, viruses, etc.) and disintegrates them through membrane disruption in the body. (Dr. Royal Rife)

The number of sessions will depend on your specific needs. Most clients notice improvements with a minimum of five sessions.

The Hyperbaric Room may help in the treatment of: